Lake River Lake, The Penn Review, Vol. 69.2
Lullaby in Fracktown. Poetry magazine, January 2016
Back When Saving the World Was Easy and Death, Angels, All Practicing, Roots & Resistance: About Place Journal, October 2018
An interview on Climate Stew, called Raising Children in a Time of Climate Change in which I read two poems.
​What's F**ked Up About Abundance, Hawk & Handsaw Journal of Creative Sustainability, July 2014
Grief, Ecotone, Spring 2008 (a slightly blurry version from a database)
​My Bigfoot Theory of Love, ISLE: Interdisciplinary Studies in Literature and Environment, July 2000 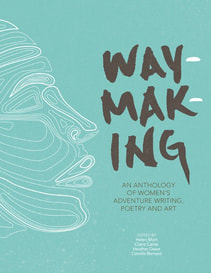 Barefoot Princess, a middle grade novel, is a witty, fast-paced fantasy for girls who yearn for adventure long before they yearn for romance.

﻿Twelve-year-old Amira is a rock climbing princess who loves the outdoors and hates shoes—almost as much as she hates having to behave properly. When her younger brother is allowed to go on a trip beyond the small kingdom—something she’d been waiting years to do—Amira attempts to stowaway. She wants to meet interesting people, ones who are different (like her). But while climbing the castle walls to sneak out, she falls into the river, plunges over a waterfall, and gets washed into the forbidden world Downriver. Shrunk to several inches tall, Amira teams up with a newt who has to leave the water because he lost his gills, and a rock-n-roll fairy who is an outcast by choice. Neither believe that muddy, muscled Amira is a princess, but they will help her look like one in hopes she can command the invading giant trampling innocent creatures to leave. Amira, is surprised to find that what she wants most of all is to return home. Now she must use everything she learned from the dreaded diplomacy lessons or else she’ll be gone in one bite before the giant can set her on top of the cliff so she can begin the long walk upriver.

As the three put their plan into action, Amira tries to figure out how to save Downriver, return to normal size, and be with her family without losing her first real friends. Her biggest fear is that the giant won’t believe she’s a princess either because, heck, what does she know about what makes a princess a princess? She’s spent her entire life trying not to be one!

In a world where nature and magic are equally fascinating, Amira is a rock climber who prefers to stand on rough edges rather than smooth hers out. This story will appeal to girls who like to get dirty and play dress up—girls who love their family and want to explore. It meets Common Core guidelines in science/natural history, and I will create teacher and student online resources.
test